Maria & Zach – The Lambeau Wedding Event of the Summer

“It is such a happiness when good people get together – and they always do.” – Jane Austen. Good people, that is how I would start to describe Zach & Maria. When I first met this couple, I instantly knew that they were going to be fun to work with and also give me the opportunity to photograph a relationship that is full of laughter and unforgettable moments. Their relationship may be like other couples I photograph in some ways, but they have a simple and honest way of showing their love for one another that makes them stand out in a crowd. They are also the couple that just “goes with the flow” and will have a great time no matter what is thrown their way. Zach and Maria met at Car Quest in Iron Mountain, MI. The way they met was very unique and also a testament to the fact that their love was meant to be! Maria’s aunt and uncle owned Car Quest and asked her to deliver subs one afternoon. Zach was delivering car parts that very same day, and the two of them crossed paths. Zach and Maria took a photo together as a joke to send to Maria’s dad. That first photo turned into a long lasting relationship! As the two started talking more and more they went on their first date together at Angelina’s restaurant. Since the first date went so well they continued to do things together because they were always laughing and having a great time with one another.

Eventually Zach knew it was time to tell Maria that his feelings had grown, and he told her that he loved her. They had enjoyed an evening which included going to dinner & a movie together…and then he said “I Love You” before he had to leave Maria to drive back to Iron Mountain. Long distance can test a relationship in many ways, but these two learned to cherish their time together because they had to spend so much time apart. They kept their long distance relationship thriving for two years before they were finally able to come together!

July 7th, 2018, Zach enlisted the help of their dog Izzy to propose to Maria. He tied tags on Izzy’s collar that said “Maria Messer, I love you, Will you marry me?” “Mohm, will you marry my dahd? Love, Izzy” She said yes! From there the wedding planning began. During their photography engagement session, Maria & Zach were all smiles and light laughs. Together they shared tender kisses, snuggles, and giggles to showcase their wedding excitement and love. From nature inspired scenery all the way to Lambeau, these two couldn’t stop sharing their wedding day plans and reminiscing on stories throughout their engagement session.

Leading up to the wedding, Zach was most nervous about forgetting something for the ceremony. Maria was also nervous for the ceremony, but excited for what was planned for the rest of the day! July 20th, 2019 was not your typical warm summer day in Wisconsin. Mother nature had some pretty crazy things in store for Zach and Maria on their wedding day. 14 tornadoes across the state of Wisconsin to be a bit more precise! Both Zach and Maria couldn’t help but think, “Why didn’t we choose the weekend before or after this instead?” More than anything, the two just couldn’t wait to be safely reunited and married once all the tornado warnings and intense weather stopped. Despite the weather, Maria and her ladies were pampered at Dame Salon in De Pere throughout the morning until they departed for Lodge Kohler where Zach and his men were getting ready. A quick trip to McDonald’s helped everyone calm down after the storm and fill up before the ceremony! Even with all the craziness, Maria was able to share a special moment revealing her bridal gown to her bridesmaids as well as to her father before the ceremony.

The ceremony took place in Lodge Kohler’s Leaps and Bounds Cafe near the lobby. Luscious floral work by Buds n’ Blooms decorated the space in addition to the already beautiful decor at the hotel. The bridal party made their entrance followed by Zach & Maria’s dogs, Marlee and Maizee. When the time finally came for Maria to walk down the aisle, Zach remembers thinking how blown away he was by her dress and her overall beautiful self. Their ceremony included stories showcasing their relationship as well as a knot tying presentation uniting the couple as one. Their mothers were both a part of the knot tying which symbolized their families coming together as well. After sharing their first kiss as husband and wife they signed their marriage certificate and cherished the moment while taking family photos. With the weather still being a bit damp, the wedding party traveled downtown to Titletown to take some indoor photos at the brewery. Modern decor set the scene for this bridal party to share some laughs and excitement together. 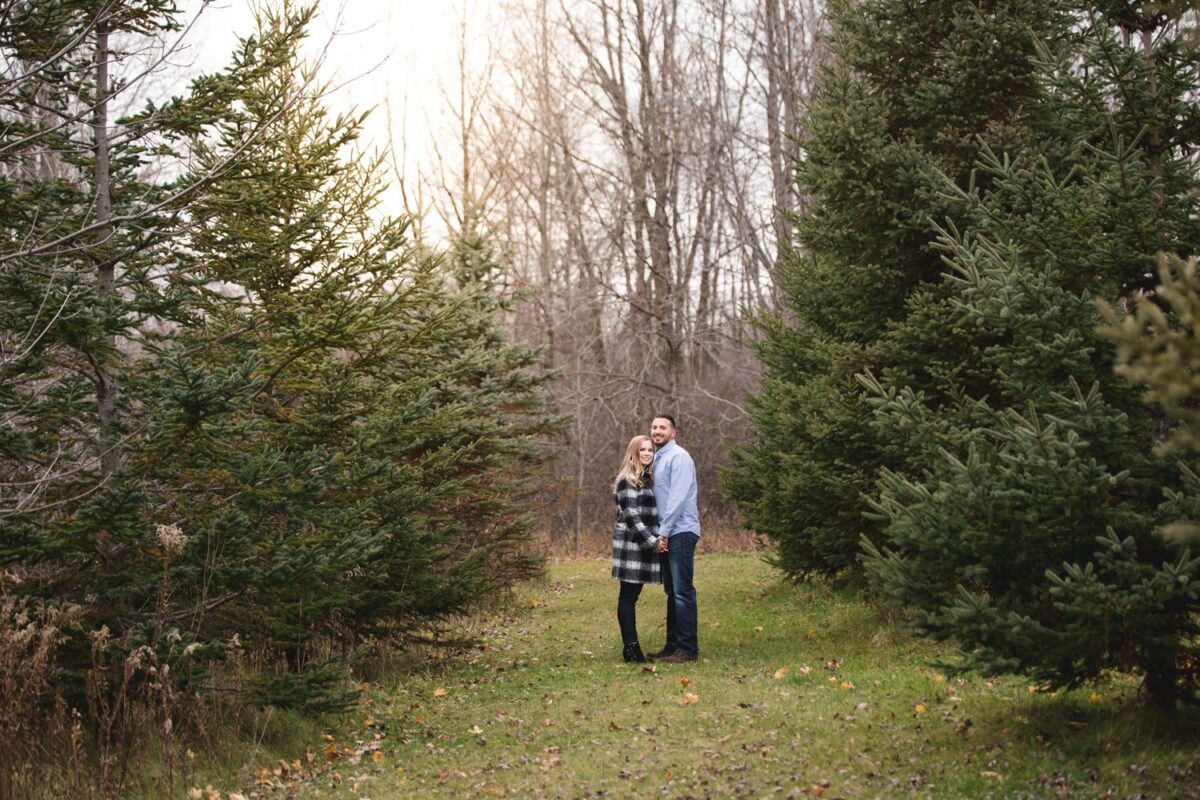 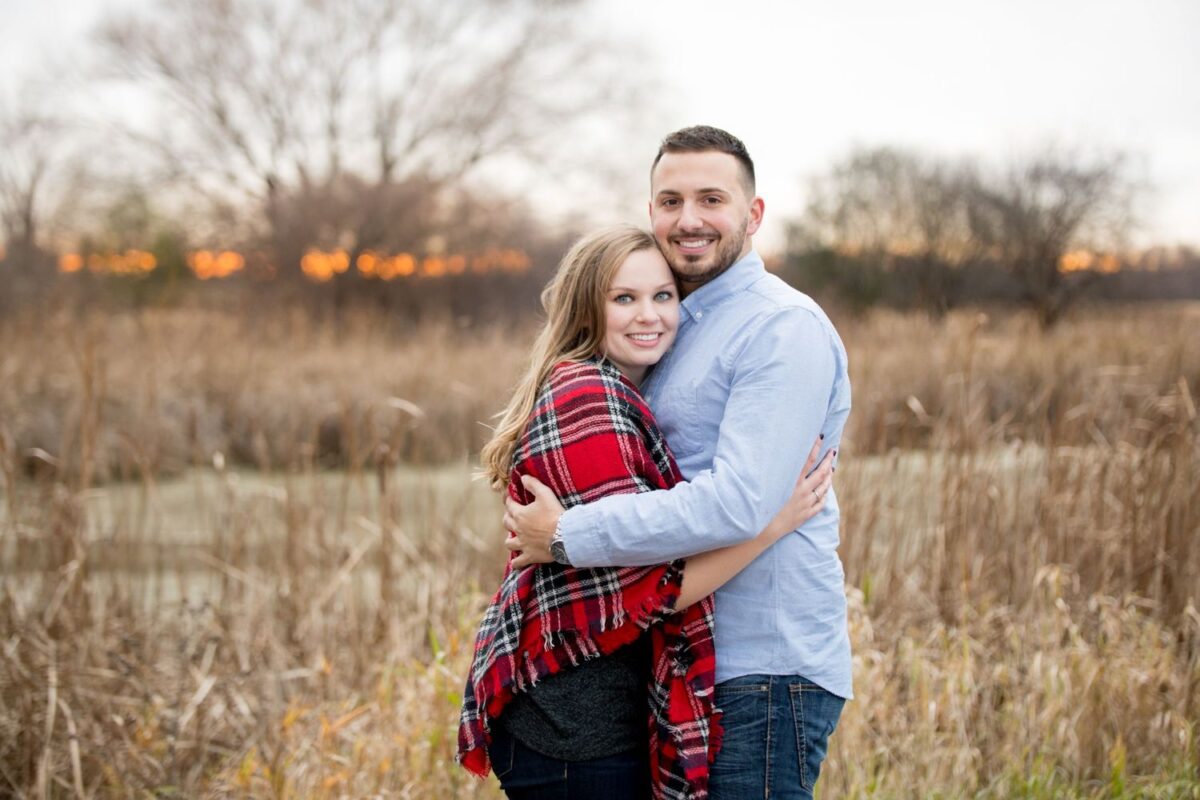 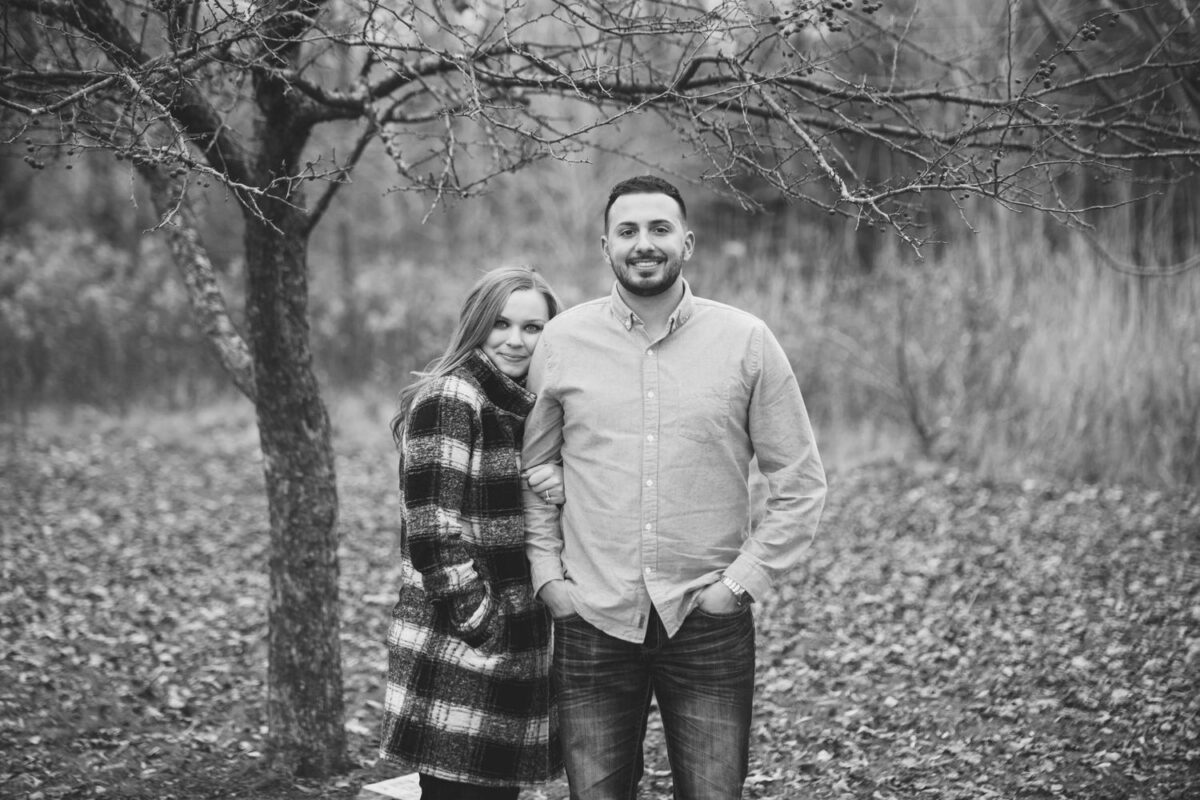 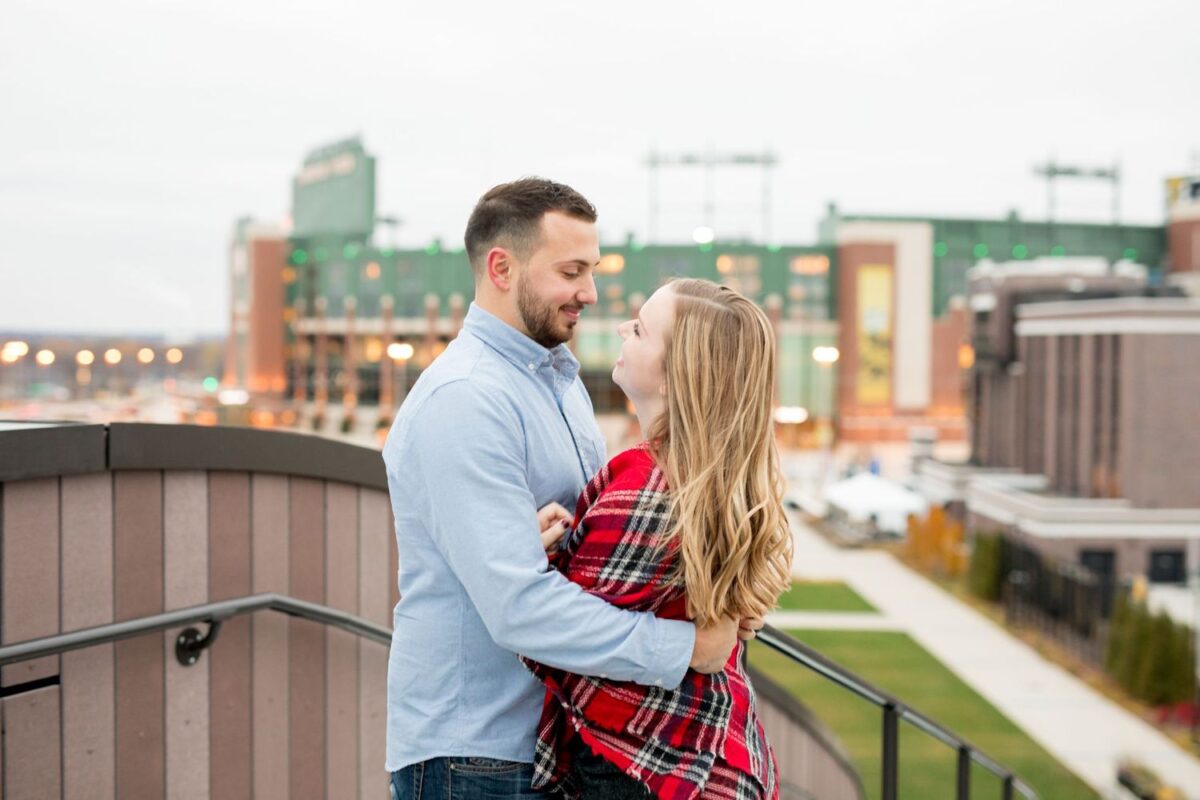 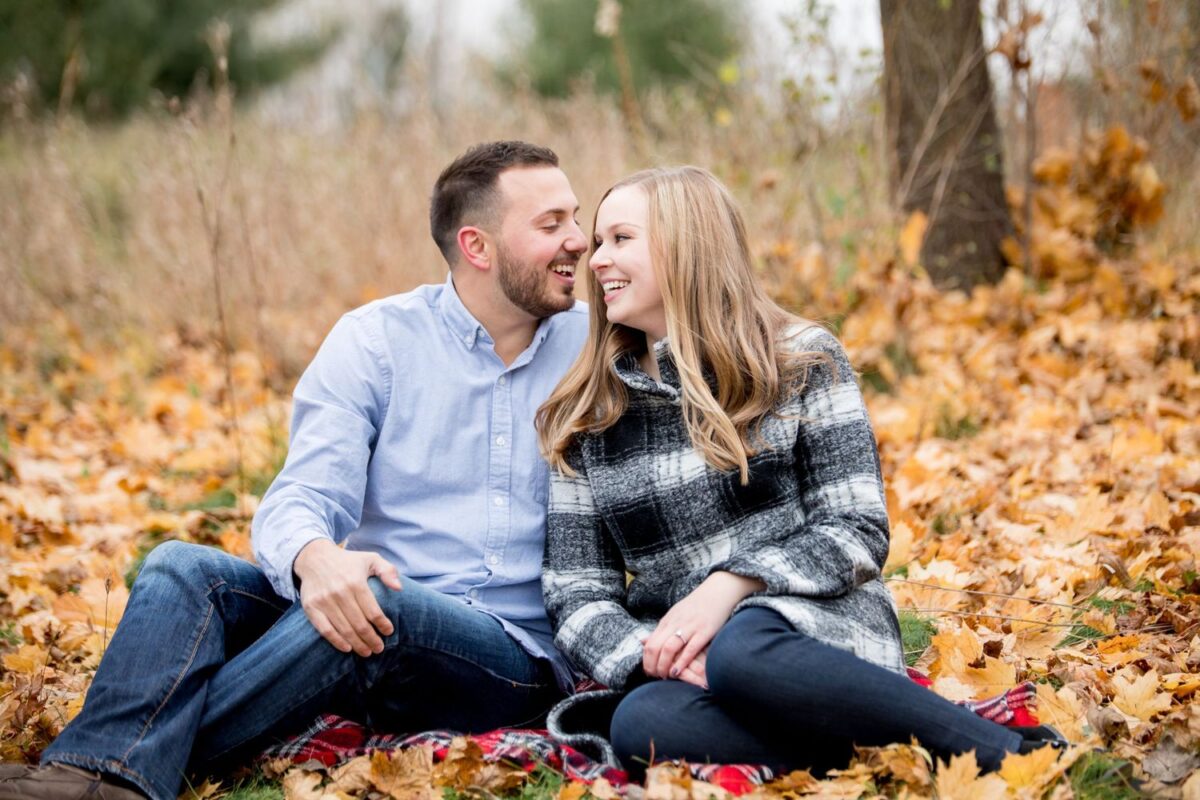 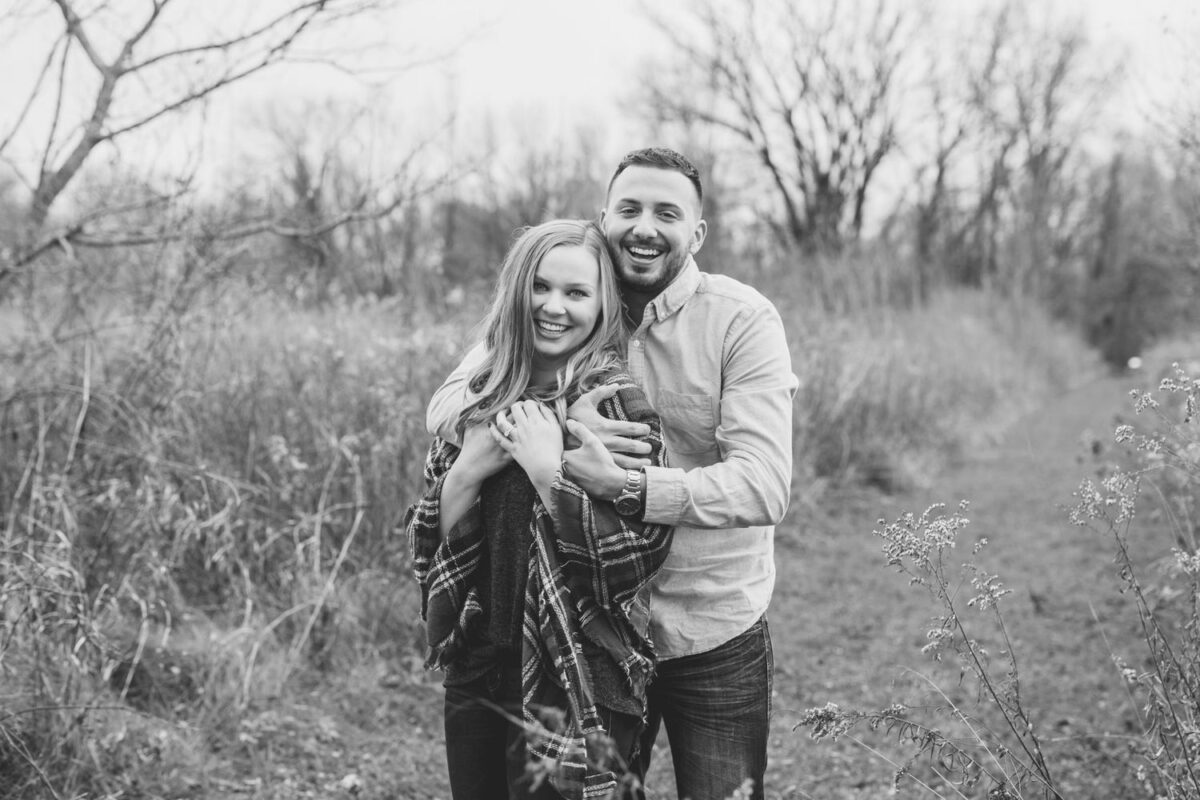