Welcome to the world, Henry.

Henry Alexander Mickelson was born on Thursday, March 5th, 2020 at 6:09 pm to Alex & Jamie Mickelson. He weighed 8 lbs 9 oz and measured 21 inches in length. Mom’s first thought was “He’s perfect.” He looked up at her with his deep blue eyes and she knew that she was forever his. Dad felt terrified at first, waiting for his baby to breathe and lose his blue color. He felt more relaxed upon hearing the nurse reassure him that everything was normal and that baby was doing well. 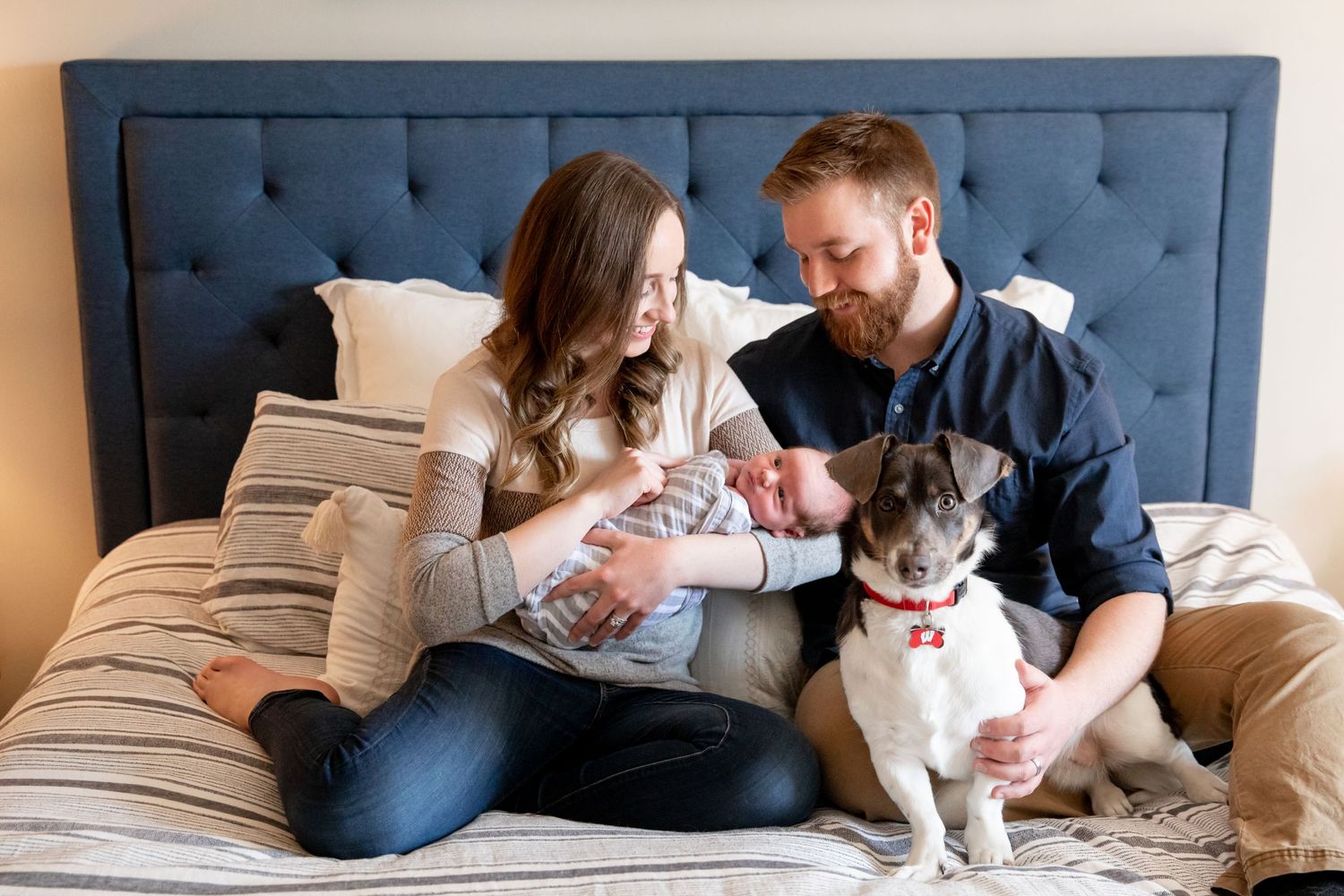 Jamie and Alex were together when they found out they were pregnant. Jamie used a very basic pregnancy test from Amazon, so the first positive test didn’t really feel trustable. A few days later she bought a digital test and received another positive result. Alex still couldn’t believe it that day, but he got his world rocked when he finally heard that tiny heartbeat for the first time at the doctors office. Alex remembers, “As the baby grew, I was terrified of the kicking – it was weird to feel something moving in her stomach!” Jamie’s doctor described her pregnancy as boring, in a very positive way. At first, Jamie thought she would eat super foods and maintain a new healthy diet throughout her pregnancy. Her typical diet compares more to a ten year old. After spending an entire Sunday meal prepping and reading about all the great foods to eat, she realized how disgusting these foods tasted and returned to the staples that settled her stomach. Her go-to options included applesauce, ravioli and mac n’ cheese! The hummus wrap with red peppers made its way into the garbage can instead.

“Alex & I have a lot to celebrate this week. 7 years together, 1 year married, and 6 months until we welcome a little Mickelson into our lives! I can’t wait to meet our little lemon, but I am even more excited to go through this wild and scary experience called parenthood with my best friend. Little Mick arriving in March!” – Jamie, August 25th, 2019

Things also changed for Alex during the pregnancy. When Jamie had really rough morning sickness, he would bring her a glass of water and a granola bar to bed each morning before she woke up. If she ate before standing, it helped with the nausea. Jamie always knew Alex was a patient man long before she married him, but each stage of her pregnancy proved he could handle even more than she knew possible. In her first trimester Alex was making buffalo chicken dip downstairs in the kitchen for a Brewer tailgate. Jamie, who was upstairs in the bedroom, woke up to the smell coming up the stairs and felt nauseous. She texted Alex and asked him to take his cooking project outside. What a man – he finished making the dip in the garage! Towards the end of pregnancy, Jamie’s nesting instinct (combined with anxiety) was in full force. Alex’s to-do list grew at an extreme rate. He handled each task with grace. Dad stepped up to deep clean the oven, repair the stain on the stairwell and reorganize paint cans at Mom’s request. All necessary tasks to complete before a baby comes home!

Jamie was convinced that she would go into labor early. Every cramp or little ache felt like a sign that labor was happening. It wasn’t until her due date arrived and passed that she realized their baby didn’t want to come out! The day after her due date, Jamie & Alex went to the doctor to schedule an induction. The doctor was surprised when they requested the first possible appointment – that night! In the ten hours leading up to their induction, they went grocery shopping, bought Alex a latch hook kit, watched TV and paced around the house.

The induction process started slow and had Jamie wondering if they were doing the right thing. Jamie remembers thinking, “Are we forcing our baby to come too early?” Shortly after midnight Jamie’s water broke and things progressed quicker. Jamie’s excitement ended quickly as contractions kicked in full force. They were about a minute apart from the beginning. Jamie labored through the night with Alex’s support. By 10 am Jamie decided it was time to get an epidural. Although initially reluctant at the idea, the process was not as bad as she anticipated and it allowed them both to get some much needed rest. Jamie woke up a while later to increased pain and the urge to push!

Alex was more involved in the birthing process than he initially expected. Jamie’s nurse also coached her through the pushing. Jamie remembers it starting off easy and feeling very confident. She even had the energy to tease Alex about wearing his “Home Slice” t-shirt on such an important day. Jamie pushed for an hour, but had been in labor for 23 hours. She was losing sight of why she was in so much pain and declared “I can’t do this anymore!” Moments later, Henry was born!

Henry was instantly placed on Jamie’s chest after birth. She remembers it being the most surreal experience. She admired how beautiful and calm he was, not crying. Alex remembers it feeling like minutes before he took a breath or let out his first cry. It was not what he expected, but watching him get measured, weighed, and given an Apgar score of nine was entertaining and relaxing for Dad. Upon birth, Mom & Dad noticed how curly Henry’s hair appeared at first – like Mom’s hair. It wasn’t until this first bath that his hair turned straight like Dad’s. He was born with deep blue, almost gray eyes. He has one of each of his parent’s ears – a pointy ear like Mom and a notched ear like Dad. They also noticed his long legs and big feet!

“A baby fills a place in your heart you never knew was empty.” Jamie

Henry was given his first name after Jamie’s maternal grandfather, Arthur Henry Wild. Jamie called him Buppa in her younger years and remembers most things about him through photos and stories. Grandpa Wild passed away just before Jamie’s second birthday. Jamie’s baby book shares stories from her mother that tell of the strong love he had for his granddaughter, and that his eyes never left her when they were together. Buppa reminds Jamie of Alex in many positive ways. These two men have huge hearts, contagious smiles and always put family first. Which is why Henry’s middle name is Alexander, after his father. Henry Alexander Mickelson holds a meaningful name, and one that also sounds like a King’s name to many who meet him! His name was kept a secret throughout pregnancy; however, Jamie’s mother guessed it correctly as soon as they learned his gender and Alex let it slip accidentally to his family. Other than that, it was a surprise to most friends and family after birth!

The first few days at home gave way to much excitement and nervousness. The first task when they all arrived home together was to introduce Henry to their one year old puppy, Josie. Within seconds she was obsessed with him. She was always under Mom & Dad’s feet trying to get a closer look at the new human in the house! If Henry needed a diaper change, Josie was there to watch. If Henry needed to be rocked to sleep, Josie was jumping up to make sure he was sleeping. When they’d swaddle him, she’d jump in the blanket, too. The frustration was growing, but everyone was adjusting at a gradual pace. The second task was to recreate the flow of the hospital room in their home. They staged their bedroom and bathroom to mimic the flow of the family suite at St. Mary’s hospital. Jamie, Alex, Henry & Josie barely left the bedroom for the entire first week! Many hours were spent on Amazon ordering every type of swaddle, pumping supplies & a changing table. Right from the beginning, Henry was a wonderful sleeper. Mom & Dad actually woke him up every three hours to eat! Breastfeeding brought new challenges for Jamie & Henry though. The latch was causing more stress than success, so Jamie found success in pumping and offering a bottle to Henry. It took a while to fall into a rhythm, but it happened and kept them both less frustrated.

Henry was born just before the global pandemic of Covid-19 swept in and shut things down across the nation. President Trump declared a national emergency to combat coronavirus just one week after his birth. Thankfully, the labor and delivery process was not impacted by the health crisis. Just days later Americans were advised to practice social distancing and avoid unnecessary travel. Henry was able to meet his Grandma Chris, Grandpa Luke, Grandma Carrie & Auntie Emily in the hospital. The four of them spent hours waiting in the hospital and were very patient before getting to meet him for the first time. The day they arrived home, Jamie’s Aunt Peggy and Uncle Jim delivered dinner and met Henry. The next day Jamie’s sister Stacy, her brother Jared and their families came to visit. Jamie’s nephew Brenton loved holding him for the first time and said he was very cute! The following days included visits from close friends, Bryce, Jordan and McKayla. It was after this that all visits were postponed until further notice. Jamie & Alex are very excited for in-person visits as soon as the pandemic is under control and it is safe again. For now, FaceTime and an app called Tinybeans has helped to share his milestones and growth with friends and family from a distance.

“It’s no surprise that Josie tried to steal the show during Henry’s photo shoot.” – Jamie

Henry’s newborn photos were taken on the day he turned one week old! Mom and Dad were excited to share that he is sleeping great, taking a bottle really well, enjoys looking at black and white flashcards, reading books and listening to his parents sing to him. When he is awake, they keep him busy on tummy time and soak up all the interaction they can together. Within the first two weeks Henry was able to lift his head and hold it up for several seconds. He pushes down on his legs when his feet touch something and loves to throw fists. He was even scooting and grunting on his tummy sooner than they expected. He shocked both of his parents at four weeks old when he rolled from his tummy to his back for the first time! He just kept doing it, over and over again!

“My favorite part about being a mommy is when Henry falls asleep in my arms or on my chest. I love those quiet, peaceful moments when I can just stare at him and take it all in.”

“I love when Henry scoots around on my chest. It’s fun to watch him hold his head up and look around.” 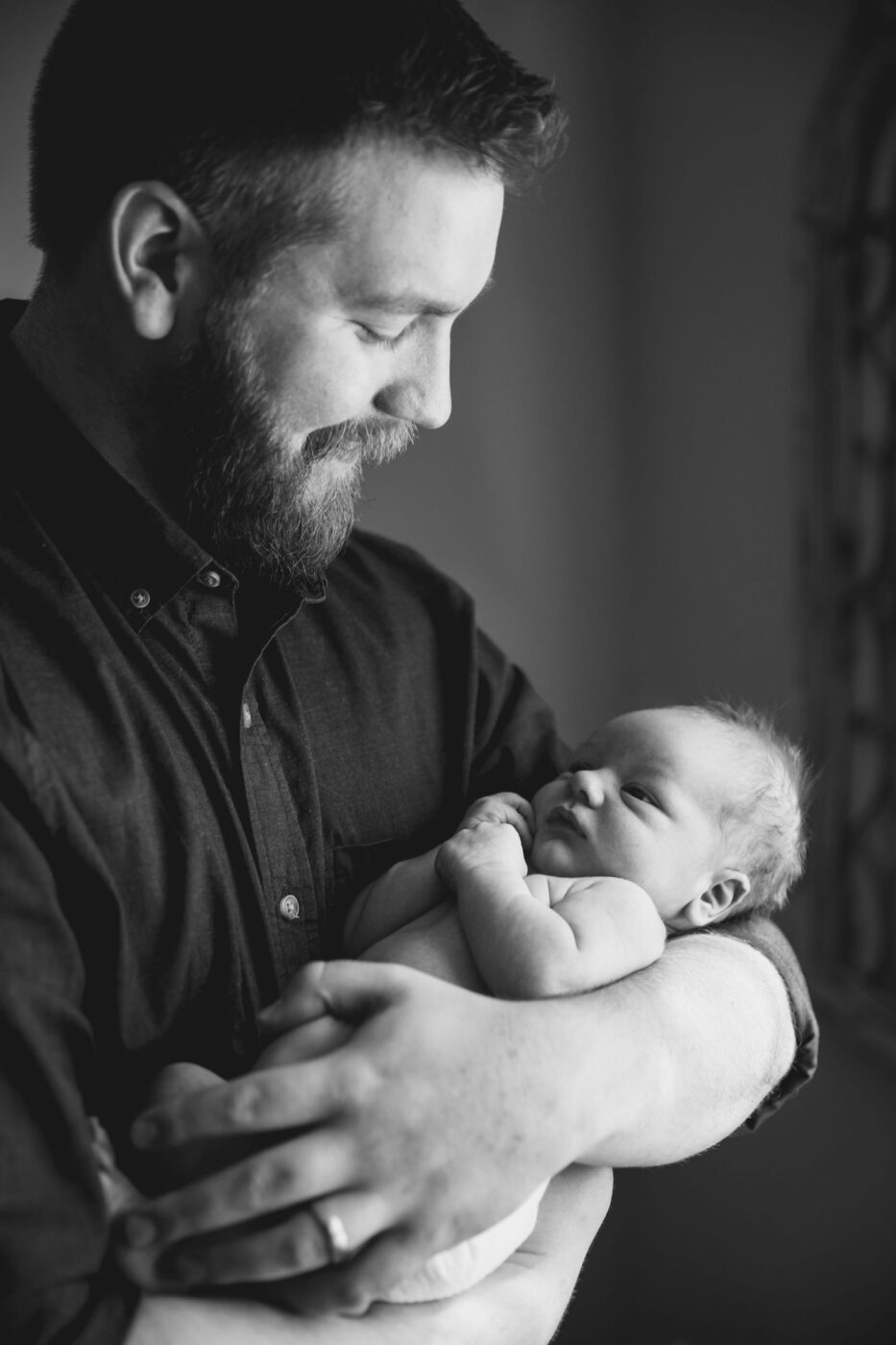 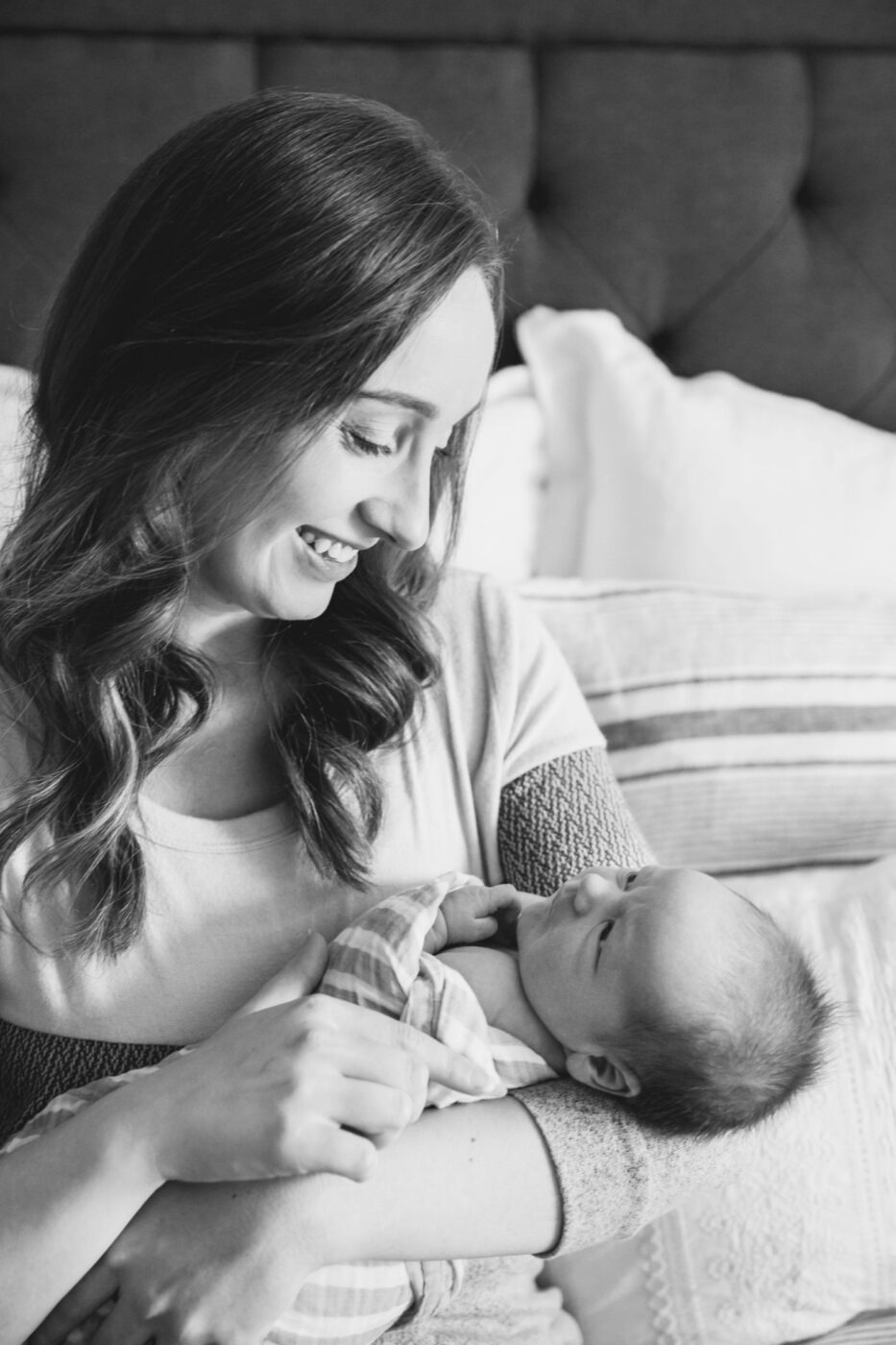 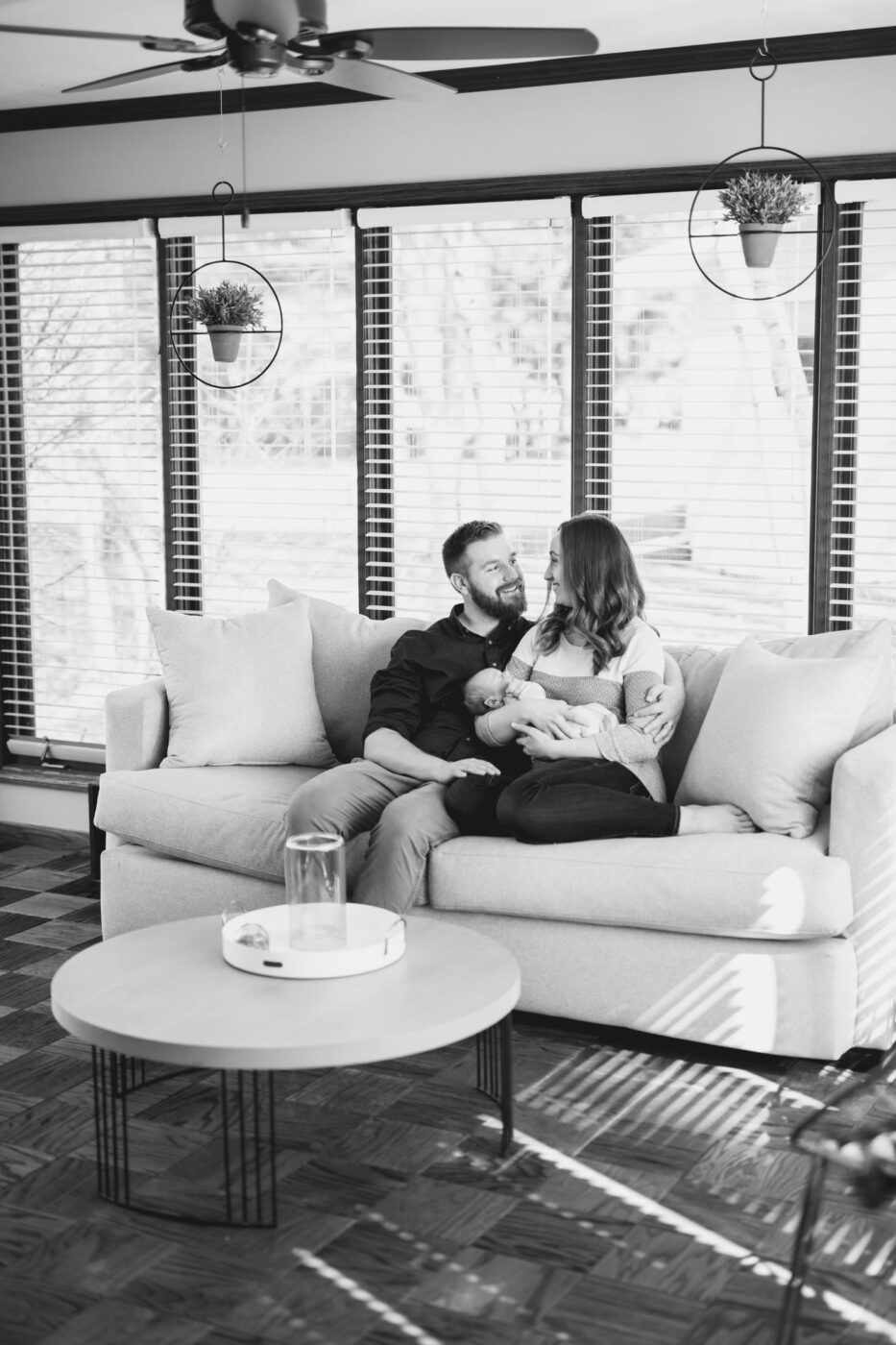 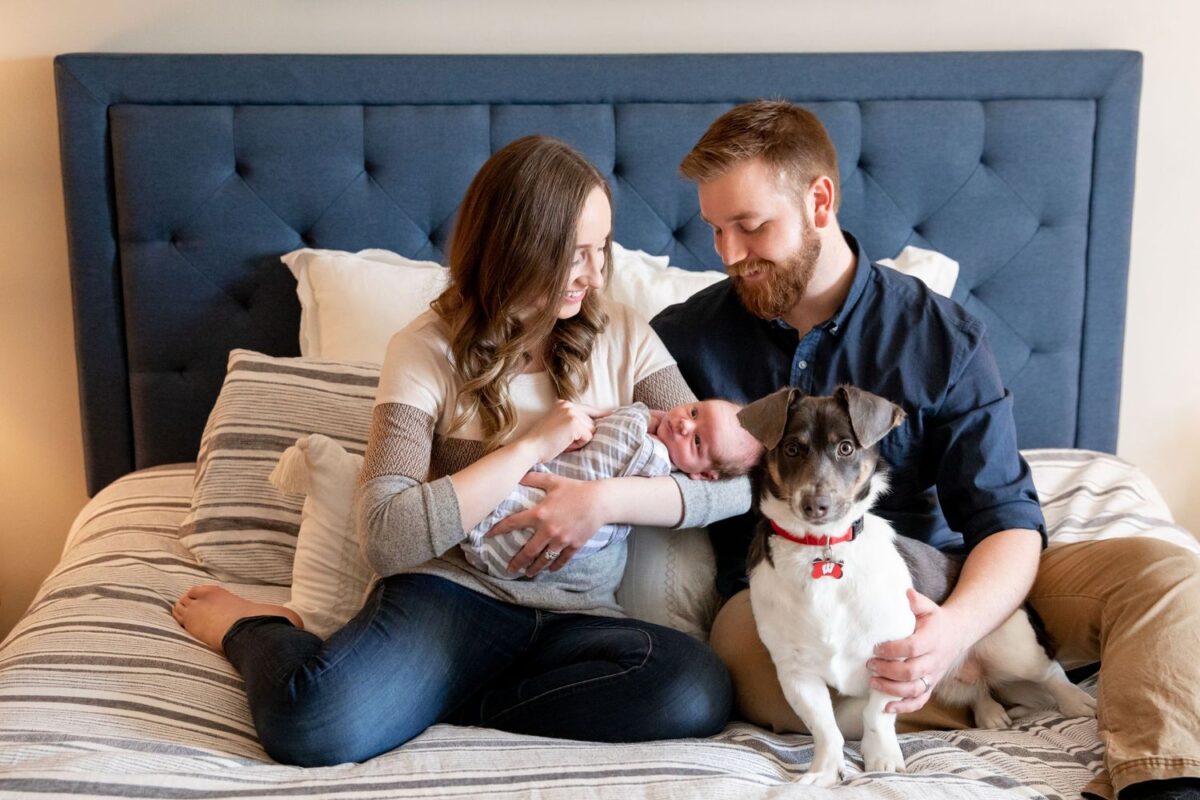 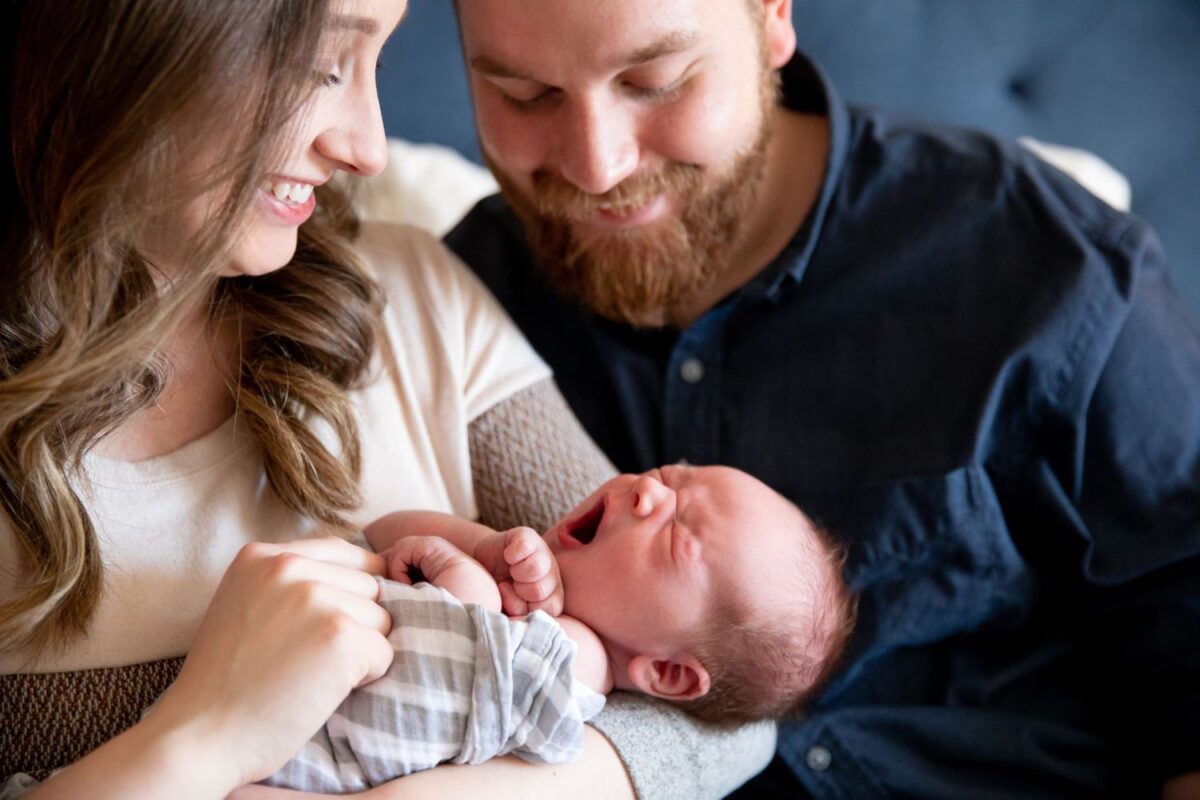 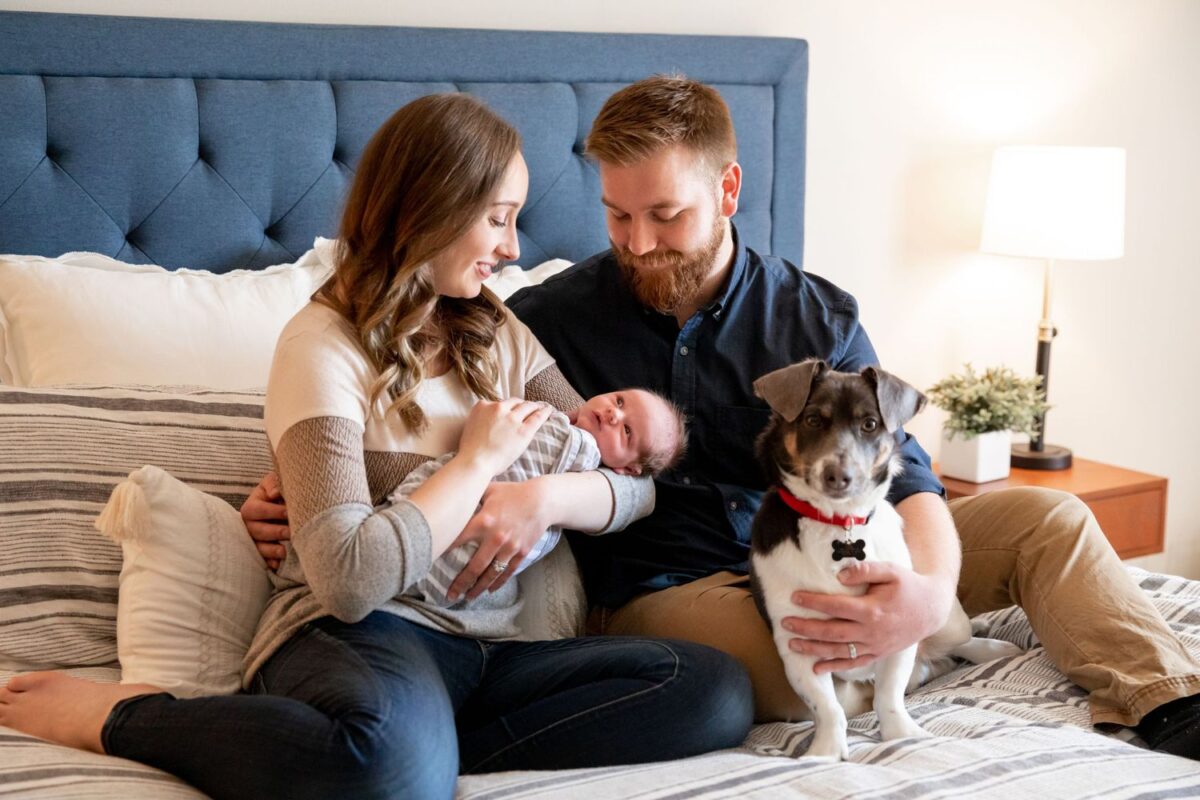 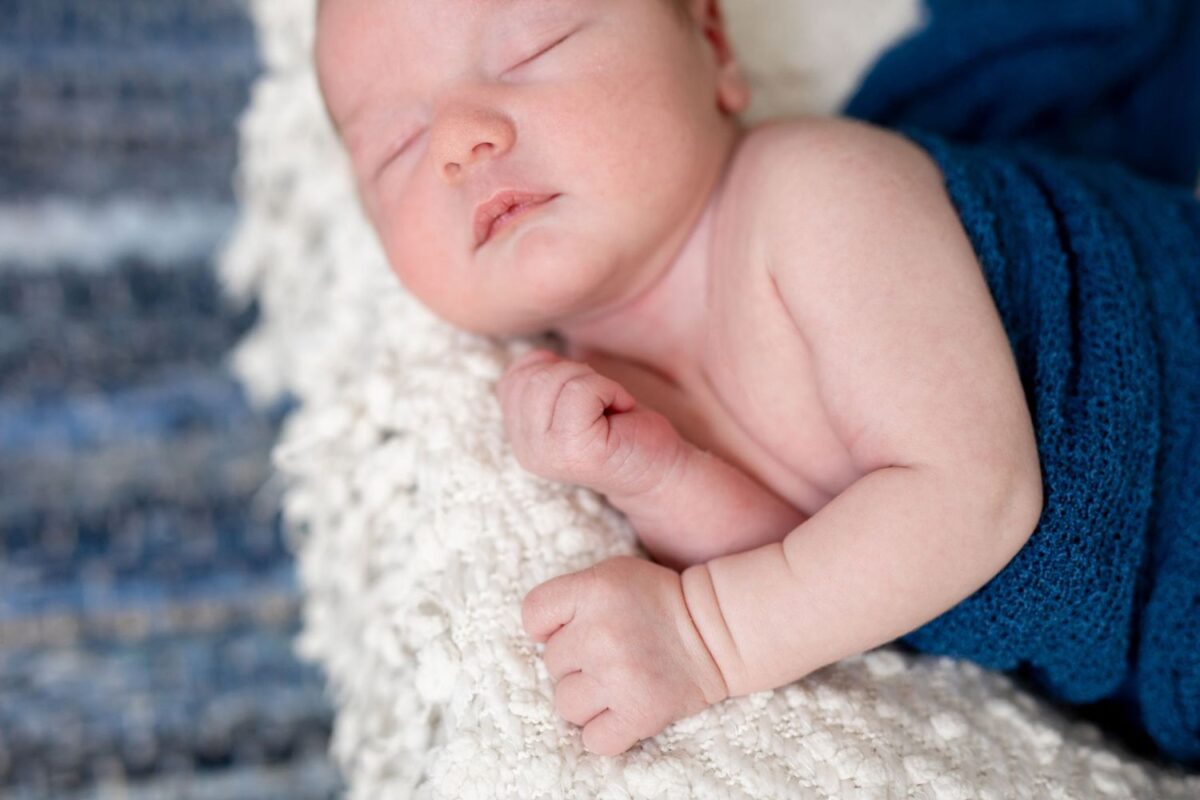 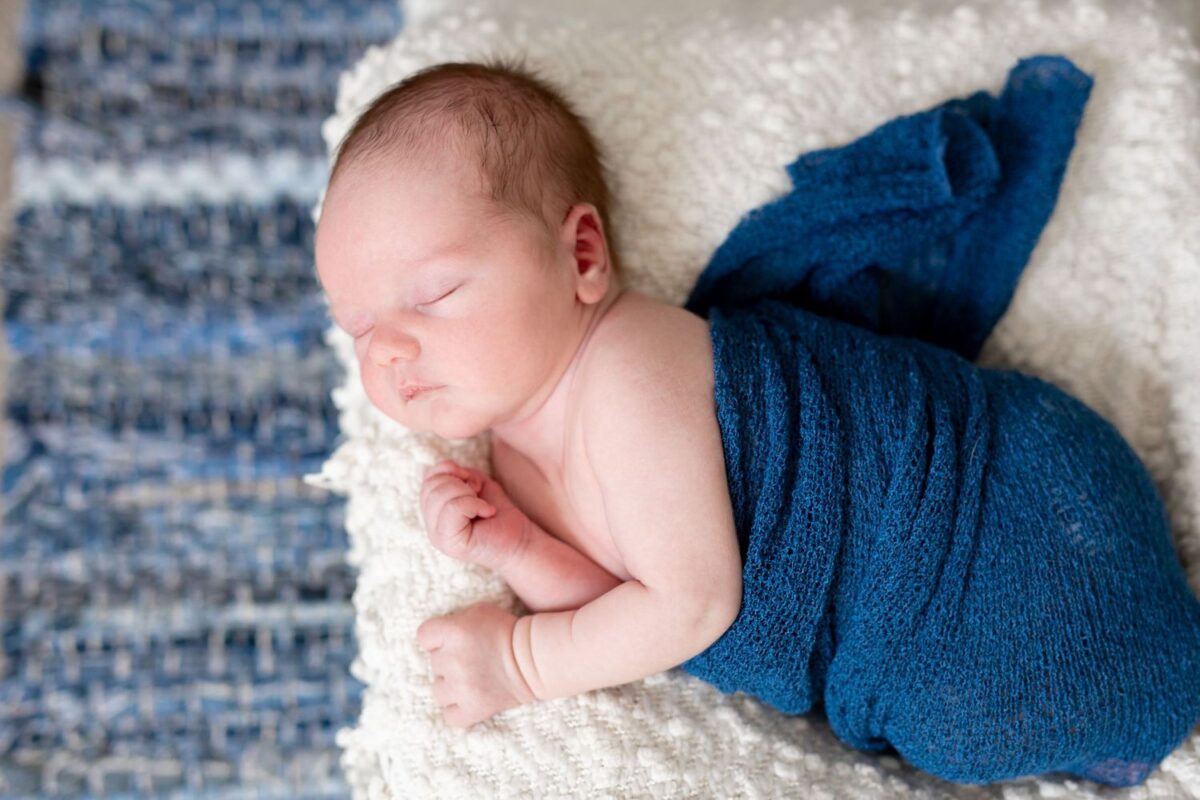